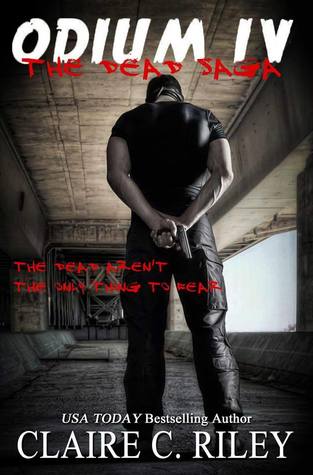 The Dead Aren’t the only thing to fear…

Luckily a new group—the N.E.O.s are on hand to ease Mikey’s burden and help fight alongside him. But first he must prove his worth to the leader Aiken and the people that follow him. Within this new group, Mikey begins to find a form of peace that he didn’t think was possible after losing Nina, and he discovers his place within this new world. A place where killing isn’t for fun, and is only ever committed as a last resort.

His heart is still aching, but at the end of the world there’s no time to stop and mourn, and as he searches out a Circus Freak Show and the horrors begin to stack up around him, Nina slips far from his mind.

It’s probably best, because there are many more terrors in store for him. Because within the folds of a small town, inside an old candy store, he meets a woman named Clare, her two dogs and something that he never saw coming.

I will NEVER get tired of Claire’s writing. Her characters are some of my favorites. Well the ones that are still living anyway 😉 That’s one of the main things I love about Claire. She’s never afraid to kill someone off. Just when you start falling for them and grasping at straws for more, they’re gone.

This whole series is one emotional roller coaster. Nina and Mikey have been on a long tiring adventure bouncing from place to place together. They’re tired and have been down a very long road with so much more to go.

At the end of Odium III I was crying. Dang you, Claire! She always does it to me! I couldn’t wait to dive right back in when this book hit my kindle. It picks up right where we left off with Mikey, Adam, and Joan.. and man, is Mikey pissed. Pissed at Nina, pissed at life, pissed at the world. I liked being in Mikey’s head majority of this book. His thoughts were dark at times but his humor is still there. I was even mad at him for a little while, I just wanted him to GO and DO! Do SOMETHING! (Staying as spoiler free as possible here, no worries.)

The Circus Freak Show is definitely that – FREAKY! The barn, the woods, the Circus. Set the perfect ominous setting. Then the candy store happens and it changes the entire story! Things take a wild turn and everything gets ten times darker.

Death, fear, gore, survival. The feelings are pretty heavy in this book. I felt like it was the perfect bridge, the perfect story to set up the next book. Which I CANNOT WAIT FOR! It’s what I’ve been waiting for all along! Or at least what I HOPE will happen!

*I received an ARC in exchange for an honest review. Many thanks for allowing me to read this book.