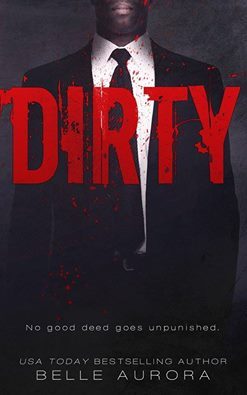 My marriage seemed perfect from the outside looking in.
People envied me. They wanted my life, wanted to be me.

They had no idea of the horrors that lurked behind closed doors.
They didn’t know I was at the lowest point a person could reach.

He saved me.
I screwed him over.

Now everybody was after me. My life was forfeit.
It was only a matter of time. I was a dead woman walking.

The question was, who would get to me first?

Holy guacamole! A moment of silence for the epicness of this book is required….. I just can’t deal with it. We waited a long time for it and every second was SO SO worth it. Belle nailed it. She nailed it so hard! If I could only read one story for the rest of my life it would be a tough call between Twitch and Julius.

Dead man walking…. We waited so long to find out what happens with Twitch after Raw. Does he get to go home? The good news is we get to see lots and lots of Twitch in Dirty. He’s on a mission to get back to his wife and son. Still hot and badass as ever. He’ll do whatever it takes, even if that means offing the big guys and he knows just where to find them. A LOT of the story relies on him. There are two nicely woven webs going on and they tie together at the end.

Julius is pure perfection. I want to go back and re-read Raw and just look at him even closer and worship him from where it all began. His mouth, his body, his kicking ass and taking names attitude… OMG! He is truly underrated and deserves a lot more recognition.

Alejandra, wife of major mob royalty, finds herself in a heap load of trouble. Used and abused ten times over. With her marriage down the drain she’s determined to get out. To run away and be done with it all, finally be free, but nothing is as it seems. With a bounty on her head and men coming at her from both sides she doesn’t know who to trust. Which one is the lesser evil.

Feelings are felt, tables are turned, and the drama unfolds. Julius finds himself feeling things he probably shouldn’t but he just can’t help it. He’ll be damned if he lets them get to his Ana.

The twists and turns, the traitors,  the action…. LOVE IT so hard. There is some gore, some nasty violence but it comes with a price and a purpose.

….And last but not least… Read those acknowledgements… MORE TWITCH IS COMING!

*I received an ARC in exchange for an honest review.